I’ve developed a bit of a cheapo overdrive pedal problem. I am now the proud owner of five of them. In this post, I will compare and contrast them, draw a few conclusions and, most importantly, decide which one is going to go on my pedalboard for the time being.

Here’s my test bed: overdrives running into my Blackstar HT-20R MkII combo. Not pictured is my Telecaster. All hail the single-coil pickup! 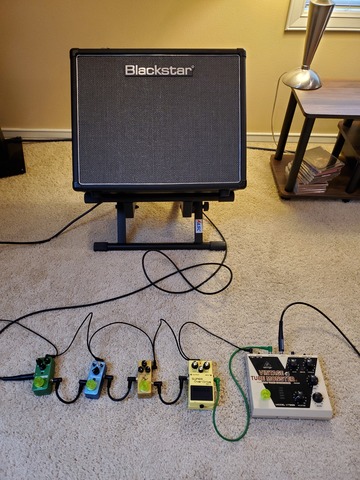 I’ll describe each pedal from left to right with my thoughts and opinions. These will be entirely subjective and your tastes will likely vary radically from mine. 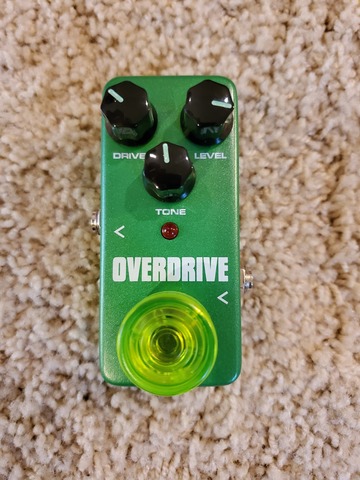 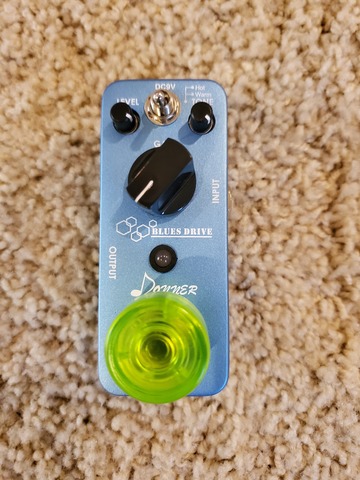 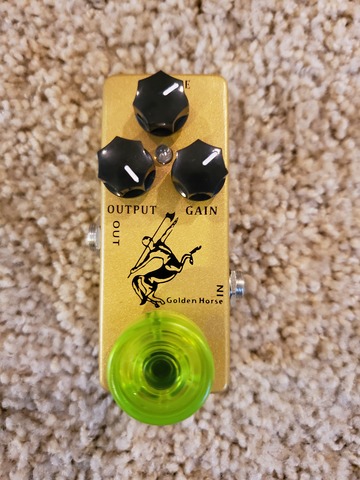 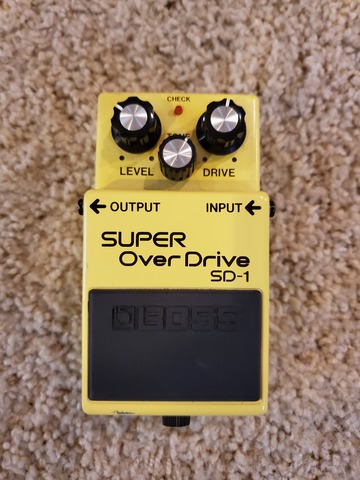 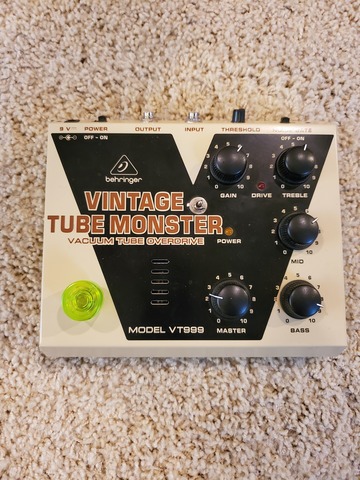 Four out of the five boxes, i.e. all except the Behringer, sound pretty similar and serve a similar purpose: relatively low-gain overdrive for bluesy noodling, boosting or for driving a valve amp harder. Those are just the characteristics I’ve been aiming for. The Behringer is a very different beast. Interestingly, I bought this one for three main reasons:

Now, bear in mind that I am no expert on fuzzes, but this box—to my mind—definitely goes beyond the realm of overdrive and towards distortion and, to my ears, sounds like a fuzz. Because this one does sound very different from others, I may therefore find it useful in the future and it may find a place on a higher-gain pedalboard (if I can find the space for it). It can get quite gainy and loud and the three-band EQ is quite nice. I think with some effort I could get some classic metal tones out of it, though I don’t think I’d be able to play more bluesy stuff with it at all.

I did much more in-depth A-B testing of the other four. Tone-wise, all four are very similar and I’m pretty certain I could not distinguish them blindfolded. Does that mean I’m no tone snob? I don’t know. Given that there is no clear winner out of the four in terms of the base sound colour, I ended up taking other factors into account:

I was able to eliminate (3) as a factor fairly early on. Overdrive stacking is what all the cool kids are doing these days. With that in mind I carried out extensive experiments with ordering of the pedals (including the Behringer) with a whole host of gain and EQ settings. I even stuck an EQ in there in order to overcome various tone shortcomings in the pedals (e.g. too much bass in the Donner’s “hot” setting; bass loss for everything else (except the Behringer); strange mids etc.). I was not able to produce anything with stacked pedals that I would use in a real situation for the following reasons:

Therefore, factors (1) and (2) are the more important factors for me. In terms of (1), all except the Behringer have a similar range of drive from the lowest gain to the highest gain settings. The Kokko definitely did not go quite as high as the other three, but was still useful and the overall colour was about the same. Thus, (2) became the decider and, in this regard, the Kokko was the winner. Of all five pedals, this was the only one that allowed me to get a reasonably clean tone with the gain/drive setting dialled down and the volume on my guitar rolled back.

Therefore, the Kokko FOD3 is the one that will be going on my pedalboard for the foreseeable future.

I have to admit that I do not think I am completely done with my pedal purchases. The following two are currently under consideration:

With these we are now getting into the realm of “boutique” pedals. They are considerably more expensive than the others I’ve tried. It’s not clear that I am sufficiently pretentious to start dropping $150 or more on an overdrive pedal, if you can believe that. Only the future will tell.